Children working outside on project 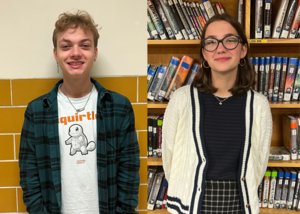 This February, Rowan and Fiona Barnes will travel to Cincinnati to perform with the high school and middle school honors choirs, respectively, at the ACDA’s national conference. This is also the first time Portage Township Schools will be represented in the honor choirs.

Portage Township Schools students and siblings Rowan and Fiona Barnes have a lot in common. Rowan, a sophomore at Portage High School, and Fiona, an 8th grader at Willowcreek Middle School, have both been involved in choir for five years and have had a love for music and singing since they were young.


Now, the two have one more thing in common: They were both selected for the prestigious American Choral Directors Association’s National Honor Choir.


This February, Rowan and Fiona will travel to Cincinnati to perform with the high school and middle school honors choirs, respectively, at the ACDA’s national conference. This is also the first time Portage Township Schools will be represented in the honor choirs.


Rowan and Fiona began singing in choir at the same time with Fiona joining her elementary choir in 4th grade and Rowan joining the Willowcreek Middle School choir in 6th grade. While Rowan was excited to pursue music and singing, Fiona was initially nervous to perform outside of her home.


“I would grab my ‘Hello Kitty’ microphone and put on little shows for my family and sing Disney classics,” Fiona said. “I was very shy about singing anywhere other than the presence of my family. I wanted to join choir to be more comfortable in my voice and to hopefully lose some of that fear.”


As Rowan has continued his hard work in choir and grown as a singer, he has become a mentor for his younger sister.


“I’m very proud of my sister for making it into the choir with me,” Rowan said. “I know she has worked so hard.”


Mr. Jordan Dollins, Rowan’s high school choir teacher, describes Rowan as a “go-getter when it comes to anything musical.”


“Rowan embodies the type of singer that we strive to cultivate at PHS - one who is musically intelligent, responsible, respectful, and humble,” Dollins said.


Mrs. Natalie Franks, the choir teacher at Willowcreek Middle School, has been fortunate to teach both Rowan and Fiona.


“Rowan and Fiona are both fantastic individuals,” Franks said. “They are both musically driven. They share a love for music and both have a natural talent for choral music and instrumental music. I feel honored to have been the middle school choral teacher for the both of them.”


Fiona said Rowan helps her with both choir and band whenever she has a question about a rhythm or a piece of music.


“He isn’t just my brother, but my best friend,” Fiona said.


Franks said that even though Fiona recognizes her talent and successes, she continuously analyzes her performances and looks for areas of improvement.


The audition process for the National Honor Choir is competitive and involves singing two songs and two scales. Out of hundreds of submissions, only 200 students from across the country are selected to participate.


Dollins hopes that Rowan and Fiona’s success inspires other students to follow their lead of working hard and stepping outside of their comfort zone.


“It’s rewarding to know that the way we’re doing things here in the Portage choir program has given driven students like Rowan the ability to achieve at these levels,” Dollins said.